Book is available in English and Croatian (30 EUR) info@arslanagic.com

The book promotion was held on 8th of May at 13h in the National library of Sisak. It gathered a big number of people from the handball world. After the promotion there was a demonstration training outside in the library square. There were five young goalkeepers performing exercises from the book. 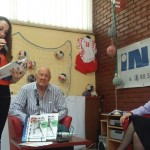 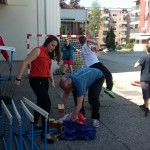 The book promotion was welcomed by the president of the association Mirsad Filipovic. The journalist from radio Banja Luka, Fikret Tufek, evoked memories about handball in Banja Luka and sport in Yugoslavia and Europe.  Reuf Jakupović, participant of many sports events, talked about the author of the book.

Thanks to the Club Lastavica, but primarily the initiative of Hadis Medenčević and Zoran Radmilović the book promotion was held in Prague.  The Club Lastavica  joins people from the ex-Yugoslavia, creates a multinational atmosphere, without the presence of politics.

Besides the members of the Club, authors Czech friends joined the event. František Taborsky, a respected member of the International Handball Federation and Rudi Havlik, a former famous handball player of the Czech national team, which in 1967 won the world championship; a member of the world national team selection.

Book promotion in Zagreb was held on the 23rd of November in restaurant “Šparka”. Former teammates from Munich 1972, Hrvoje Horvat and Zdenko Zorko were one of the participants who talked about the book and the author.
Many handball legends and stars from all generations were present that day. Just to name a few; Rudolf Carek, Zlatko Šimenc, Zdravko Zovko, Pero Janjić, Jerolim Karadža, Vladimir Jović, Sead Hasanefendić, Mirko Bašić, Josip Milković and handball team PPD Zagreb. 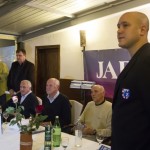 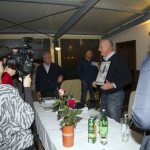 The book promotion in Kladovo was held in June 2014 during the handball camp organized by Dragan Duric, head coach of the Israelian national team where the profesor was one of the lecturer. Other famous lecturers were Staffan Olsson, former Swedish handball player nowadays national team coach and Dragan Adžić, coach of women handball club Buducnost and Montenegro national team which won the silver medal in 2012 Olympic Games in London.

Book promotion in Belgrade on 20th December in hotel M.

The book promotion in Sarajevo, in restaurant Luka, o the 27th of December. I would like to take this opportunity and thank my friend Nermin Salman and the owner of the restaurant Željko Ljubas who organized the promotion and gathered  all my dear friends.